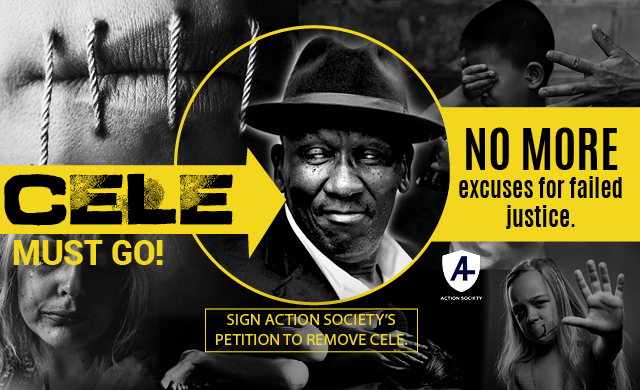 Enough Minister Cele, it is time to resign. Your complete lack of executive accountability and continued mismanagement of the police needs to stop.

The poor service delivery and the current state of disorder within the SAPS, is a crime against all the citizens of this country.

10 Reasons why Cele must go:

Earlier this year, due to non-payment by the SAPS, the Property Control and Exhibit Management System (PCEM) was switched off by Forensic Data Analysis (FDA) – the system supplier. This affected 8 million pieces of evidence, which could not be found after the PCEM system shutdown.

Government wants to take away the rights of citizens to self-defence with the Firearms Control Amendment Bill, with the aim of ‘reducing the number of illegal firearms in circulation’. We read daily about brutal murders, rape and other heinous crimes. Action Society is extremely concerned about the impact this Bill will have on the rights of South African citizens – especially vulnerable and defenceless women.  We are particularly concerned about the effect this will have on the continued violence against the innocent women and children of South Africa.

In June 2012, Minister Cele was fired as National Police Commissioner following allegations of corruption. We are quite perplexed as to how someone that was once fired as Police Commissioner is now the Police Minister.  The current National Commissioner, Lieutenant General Khehla Sithole has also been served with a notice of suspension. The suspension notice came in light of the High Court decision in January which found that Sitole and two of his lieutenants, had “breached their duties” by intentionally frustrating the Independent Police Investigating Directorate investigations into corrupt procurement deals within the Crime Intelligence environment.

The Global Organised Crime Index 2021, which was recently released by the Global Initiative Against Transnational Organised Crime, ranked South Africa 19th out of 193 UN member states.  With a criminality score of 6.63, South Africa ranked fifth out of the 54 African countries. Only the Democratic Republic of Congo, Nigeria, Central African Republic and Kenya scored higher.

Due to Cele’s mismanagement of the SAPS, the DNA backlog stands at more than 300 000 cases. While the DNA backlog continues, victims of violent crime and GBVF are not getting their day in court or the justice they deserve. At the Portfolio Committee on Police meeting on 24 August 2021, the SAPS confirmed that the DNA backlog will only be eradicated by 21 November 2022. This would mean that rape victims and families of murder victims could wait up to three years to get their day in court.

A shocking 10 000 rape cases were reported between April and June 2021 with the successful conviction rate staying at a miniscule 3%. These numbers are evident that South Africa’s rape statistics are equal to a country at war. So much has gone wrong within the SAPS in recent years and the institution has experienced major decay under the leadership of Cele.

More than 10 000 police officers, who are supposed to protect the public and uphold the constitution and the law, have been charged with murder, rape and assault since 2012. Action Society was shocked to learn that of the 10 086 officers charged, only 50 faced suspension since 2012/13.

Action Society is disappointed at Bheki Cele’s constant failure to bring the Convicted Offenders Bill (CO Bill) to parliament. The Forensic Procedures Amendment Act 37 of 2013 and the CO Bill, forces convicted Schedule 8 offenders to submit a buccal DNA sample for the population of the National Forensic DNA Database of South Africa. (NFDD).  Since the creation of the NFDD in 2015 however, the Amendment Act and the CO Bill which was introduced in 2017, has still not been finalised and is still awaiting the president’s signature. The Minister of Justice and Correctional Services, Ronald Lamola, confirmed recently that 96 785 Schedule 8 (violent crime) offenders have been released on parole since 2016 without submitting a DNA sample.

The Bill was endorsed by the Justice Crime Prevention and Security Cluster on 7 October for introduction to Cabinet.

The SAPS has a shortage of 14 000 new recruits. Cele has stated that there have not been any new recruits in the last two years because of Covid-19.

It is clear that the SAPS is a failed organisation and that Cele must go. He has failed to serve the public and to help protect the most vulnerable. Show your support by adding your name to the call.

If you agree that Bheki Cele must resign,
please support Action Society's #celemustgo campaign
by completing the form below: