Ten months after her brutal death and a month before South Africa celebrate Women’s Month, the family of Siphokazi Booi heard they would have to wait until the end of the year to finally see justice for her brutal death in September last year. The  Paarl Regional Court postponed the case to December because of a retiring magistrate.

“It is unfortunate that the matter will only resume in a few months,” says Kaylynn Palm, Action Society’s GBV Case Oversight Coordinator. “But the family is satisfied that the suspect will remain behind bars until then. Seeing a perpetrator of crime every day adds tremendously to the trauma of victims of violent crimes.”

The police arrested Siphokazi’s boyfriend Sithobele Qebe in connection with her death a month after he received bail for allegedly assaulting her. He fled when the police arrived to question him and consequently appeared in court in May this year.

Action Society has been assigned as a watching brief on the matter and will ensure that the case is being dealt with accordingly.

“We are in close contact with the family and will ensure that they are kept up to date on proceedings and prepared for the trial,” says Palm.

Booi’s dismembered and charred body was found near the Mbekweni train station at a dumpsite in Paarl, only 100 meters from Qebe’s shack. Her body was chopped up, stuffed into a wheelie bin and then burnt. When the community learnt of Qebe’s arrest, they torched his house and car in the White City informal settlement.

Siphokazi’s sister says what happened to her sister was evil and inhumane. She feels an ache every time she passes the murder scene and doesn’t want to ever see Qebe out of jail again. She wants to see justice for her sister, whom she raised since she was four.

“Violence against women and children in South Africa is alarming, and it remains a concern for Action Society,” says Palm. “It is therefore critical that we support and assist victims through our work.” 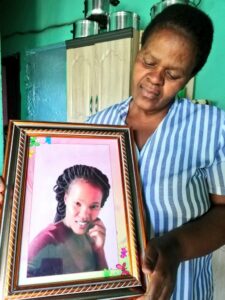 “It is outrageous that the Minister of Police, Bheki Cele, now suddenly sees the urgency of the implementation of the DNA Bill when he was directly involved with its delay,” said Ian Cameron, director of Read more…

Action Society celebrated National Women’s Day by empowering women from the Heideveld community in Cape Town against Gender-based Violence (GBV). Some 50 women attended the workshop presented along with Personal Safety. They used the chance Read more…